Submitted by JRT Studio on Mon, 01/09/2017 - 16:04
After being in the works for a couple of months, I'm proud to announce that Android Auto support for Rocket Player is here and available to test! This support is still in beta, and thus requires signing up for our beta. I'm hopeful that we'll find the bugs in this release quickly and can begin rolling this out to everyone! Update 8/7/17: Android Auto features have been released! -Justin

Syncing Play counts back to iTunes with Samsung 6.0 devices

The problem is by default, apps that haven't been used (manually opened) in the last three days will be placed into a sleep state. Apps in this power saving state may be unable to provide notifications, which is important for iSyncr. iSyncr needs notifications to be able to record play counts. This sleep state will cause problems creating play counts with iSyncr, it's recommend that you disable the feature for iSyncr. You can leave it on for other applications if you'd like. 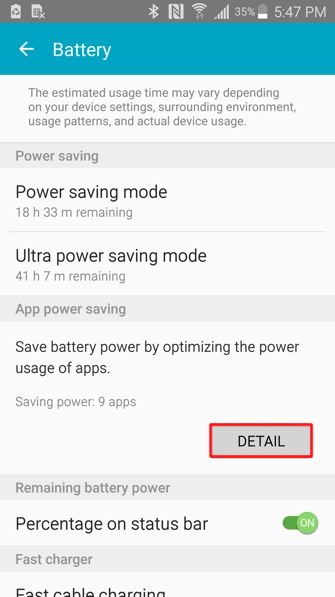 From there, you can look for iSyncr and other apps that are set to save power. 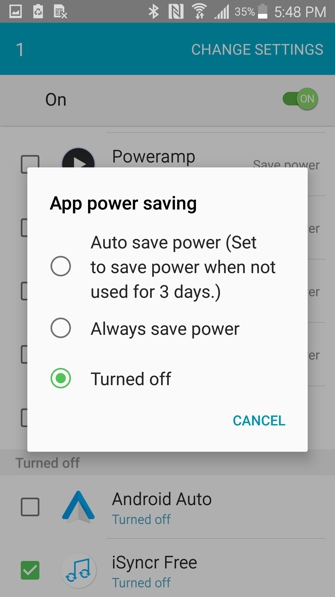 Disable the feature by selecting iSyncr, then choosing "Turned off/Disabled"

Update: 5/20/16
Sharing the iTunesMusicLibrary.XML has been turned off by default in iTunes 12.4. This setting is found by going into iTunes, selecting preferences, advanced then share iTunes music library.xml. 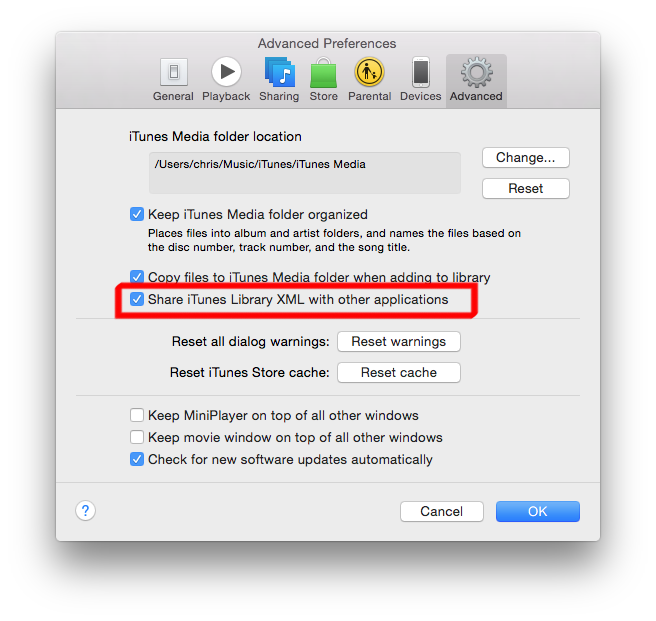 iTunes 12.4 has changed the location IDs to your specific songs in iTunes. Any old play count information that is stored on your Android will not sync resulting in a timeout over WiFi followed with an error code 6. Or you won't be able to update ratings/play counts to iTunes. 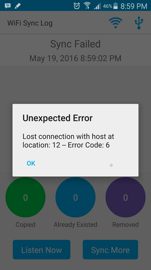 To fix play count and rating update issues, delete the iSyncr.xml and DeltaRatings.xml files with the old iTunes IDs from the /syncr folder of your Android device. Then re-sync everything (not recopy everything) on your device, and allow iSyncr/Rocket Player to get the new IDs. Do this by accessing the /syncr folder with a file management application on Android, then deleting the iSyncr.xml and DeltaRatings.xml file.
Further information will be added to this blog post when it's available.
Contact us for help 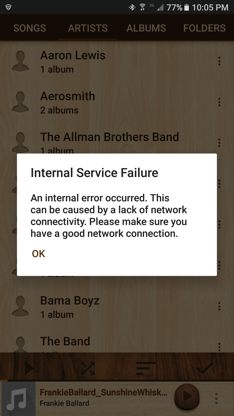 We are excited today to announce our latest creation, SongLytics. What is SongLytics? SongLytics is our project to keep track of everything we listen to on Android. We love iTunes for its ability to keep our metadata such as play-counts and ratings. However, the music world has changed. Music streaming services from Apple, Google Play Music and Spotify are here to stay. While we passionately love our MP3 collections, we understand that streaming services offer access to millions of tracks. SongLytics is our answer to keeping our metadata across Apple, Google Play Music, Spotify and services yet to be invented.

As some of you may know, JRT Studio's first successful project was iSyncr. What far fewer know is that the 1.0 release to Google Play (formerly Android Market) only synced play-counts and skip-counts back to iTunes. Our customers ate it up, and the emails came flooding in. Could iSyncr sync iTunes music? Could iSyncr sync iTunes playlists? All these became features by listening to our customers. With simply fulfilling customer requests, JRT Studio went where I'd never envisioned it could. Now, we have a suite of Android music apps from making ringtones to viewing lyrics to in our very own music player.

For now, SongLytics is like that first release of iSyncr. It doesn't do too much. Our hope by releasing the first product backend within the next month (March 16'), is that customer-driven requests and features will grow the application to new heights! For those of you out there that want to follow this project, head on over to SongLytics.net and check out our blog there. We'll be posting there, so as not to bombard the whole company blog.

Submitted by JRT Studio on Mon, 01/25/2016 - 11:06
In Android 6.0, a new feature “Adoptable Storage” feature was introduced. As we make syncing, media apps, this feature is something that I want to breakdown for our customers.

Basically, when you adopt an SD card as internal storage, the SD card becomes the “new” internal storage of the system, which is super convenient. Apps install on the SD card with ease and apps like iSyncr will just show a single, easy to use storage area. However, this ease of use comes with a price. Your SD card will not be as fast or reliable as the internal memory. Further, the original internal memory is only usable for apps, the best I can tell.

If you have further questions/thoughts/comments or a looking to solve an issue with our products, please email us!

Submitted by JRT Studio on Tue, 01/19/2016 - 14:57
Media Transfer Protocol or MTP was introduced to Android in Honeycomb (Android 3.0). I remember the first device we had with the new protocol, the Motorola Xoom. Ahh the joy! No, wait, not joy, terror. That's the word. Terror.

Why? Because at the time iSyncr was written to use Universal Mass Storage or UMS when connecting over a USB connection. The introduction of MTP required a major update to iSyncr, which created iSyncr Desktop as a way to transfer iTunes to Android. For several months, we didn't know if iSyncr would make it!

Fast forward to today and MTP is still a primary connection mode that iSyncr uses, but it's not without its problems. Many customers and others we follow have reported problems with MTP including freezes to Windows Explorer on a PC when connecting. We've seen this ourselves in our testing as well as received reports of this occurring from our customers.

MTP, unlike UMS can only execute a single action (delete, write, read) at a time. So iSyncr customers expecting a quick sync to update a few files may be disappointed in the speed they receive when connecting over MTP because of this limitation. Additionally, MTP, unlike UMS cannot transfer metadata changes. For example, if you change a tag in iTunes, but had already synced the song to your device, to see the change on your device, you'd need to delete the file from your device and resync. Other less documented issues include MTP's inability to consistently sync m3u files causing problems for iSyncr customers who want to update their playlists. Now, before I move on and receive emails about inaccuracies in the post, MTP did bring some positive things, mainly that users can no longer can corrupt their storage by disconnecting the device before properly ejecting the storage for safe disconnect. For those of you that long for the olden UMS days to sync we can sync using an SD card reader with this tutorial video. Shortly after MTP was released, we packaged iSyncr WiFi along with USB syncing instead of separate products to give customers the option to work around MTP issues. We've even gone so far as to recommend first-time customers to use WiFi syncing over USB simply because of the consistency, reliability and overall experience WiFi syncing brings.

Marshmallow, (Android 6.0) defaults to the charge connection, unlike its predecessors back to Honeycomb, instead of MTP. This has prompted one indie-developer to createMTP enabler as a way to quickly connect to MTP. To use MTP Enabler, you need to have a rooted device and be running Android 6.0. We're not exactly sure why Google's decided to give charge priority over MTP, it could be some of the problems highlighted above, something else entirely or a mistake that will be changed in Android N (Android 7.0) set to be released at Google I/O this summer.

Starting with iTunes 12 you can now rate both songs and albums in iTunes.

Now if you rate an album, but not its songs, all the songs of the album get light gray stars. Unfortunately this "feature" cannot be turned off. You can read more about the frustration iTunes customers are feeling. Imagine the live list playlist carnage! Ratings are created for songs that were previously unrated! Worse than that any rating that's added to a song appropriates through to the entire album! Take a look at the image below to see more about what we mean.

Fear not friends! We have been hard at work in the sunny JRT studio office have devised a solution. Starting in iSyncr Desktop 5.1.6 . Album ratings will be ignored when we sync iTunes to Android. Your song ratings will continue to work as they have in iTunes 11 and prior so you can maintain ratings in iSyncr, Rocket Player or any music player with iSyncr's ratings widget.

Security and privacy is a top priority for us, so we launched an investigation of iSyncr Desktop on our own. What we found was that iSyncr Desktop is still virus/malware free. Making this report by 360 Total Security a false-positive. While this is not uncommon to happen every once in a while, antivirus companies know this. They will allow you to request an examination explaining the issue and white-listing the application upon their review. We have walked through this process with 360 Total Security with no response from their side.

You don't have to take our word for it. You can scan iSyncr Desktop with with Virus Total as recommended by How to Geek. The report states that 54/55 Virus scanners including McAfee, Avast, Microsoft and more display a malware/virus-free status for iSyncr Desktop.

If you still have concerns, please reach out to us and we will send checksums at your request.

Submitted by JRT Studio on Mon, 11/30/2015 - 14:50
Update 12-10-15: We have again received reports from our customers that they've been unable to install Rocket Player Premium. If you are experiencing issues please contact us.

Update 12-7-15: We have received word from Amazon that Rocket Player Premium should now be working with the Amazon Appstore on Lollipop.

This is just a quick note that, yes, we are aware that Amazon isn't letting you download the Rocket Player Premium Unlocker to your Lollipop Amazon Kindle device. Why? Well, we still aren't sure. The unlocker app is probably the simplest app we've ever built. Nothing in Lollipop (Android 5.0) should affect it. When we look in our dev console, everything looks rosy. See? 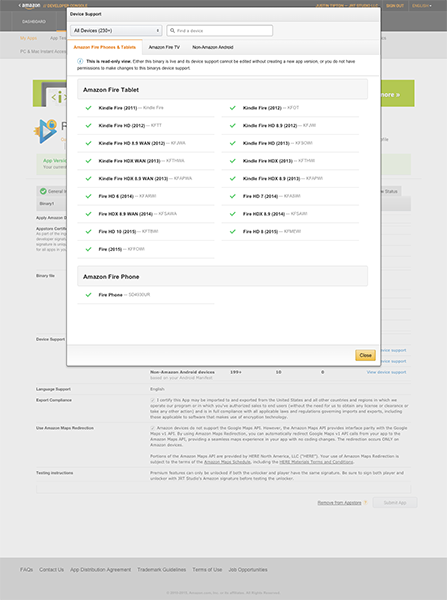 The last email that we received from Amazon regarding this app said "RESULTS: YOUR APP WILL BE AVAILABLE ON ALL TARGETED DEVICES". We received this email on April 9th, 2015. For now, we are stuck waiting on Amazon to tell us why they are not distributing the unlocker. We've gotten one response email that said "it don't work", with no more information. We've got 40+ test devices and are confident it does work. We would use the emulator image from Amazon to confirm further, but one does not exist for Lollipop. We'll keep you updated when more information comes along, but this is a shame for our customers, Amazon and all the lost time that could have been spent making improvements and bug fixes instead of dealing with Amazon. If you are an affected customer, email [email protected] and we'll do our best to help you side load Rocket Player while we wait on Amazon to give us more information than "it doesn't work". -Justin